When last we left this perplexing topic, many of you were trying to get me arrested for a crime another I committed. (I say “many of you” even though only my mom and my lawyer were trying to do that, but my circle of friends has scant points about it, so ‘many’ it was.) When we are looking at memories as the signpost of identity-pointing, there are detours aplenty. Today, we are going to move on to the third of the potential candidates for identity fixing: the physical body.

Are You Your Body?

The pros and cons of the body as a candidate for personal identity here are pretty intuitive, and much of them we have seen earlier (with memories), if in slightly different form. The body is easily recognizable, and, in fact, is how we identify others. Slight changes, such as haircuts or tanning, seem to do little to distort or erase the recognizable features. However, which features matter the most? How many of them are necessary to maintain if one’s identity is to remain constant? Suppose you gain or lose three hundred pounds, you may well feel and be unrecognizable to both yourself and others. Are you a different person?Many soldiers are returning from Iraq and Afghanistan with missing limbs; are they different people? Both examples will result in the individual’s feeling different, but is that enough for identity to change as well? Think of the liquor store example from my previous post. How would that apply here?

Suppose that I rob the liquor store, but instead of getting hit by a car I instead cut off one of my arms. 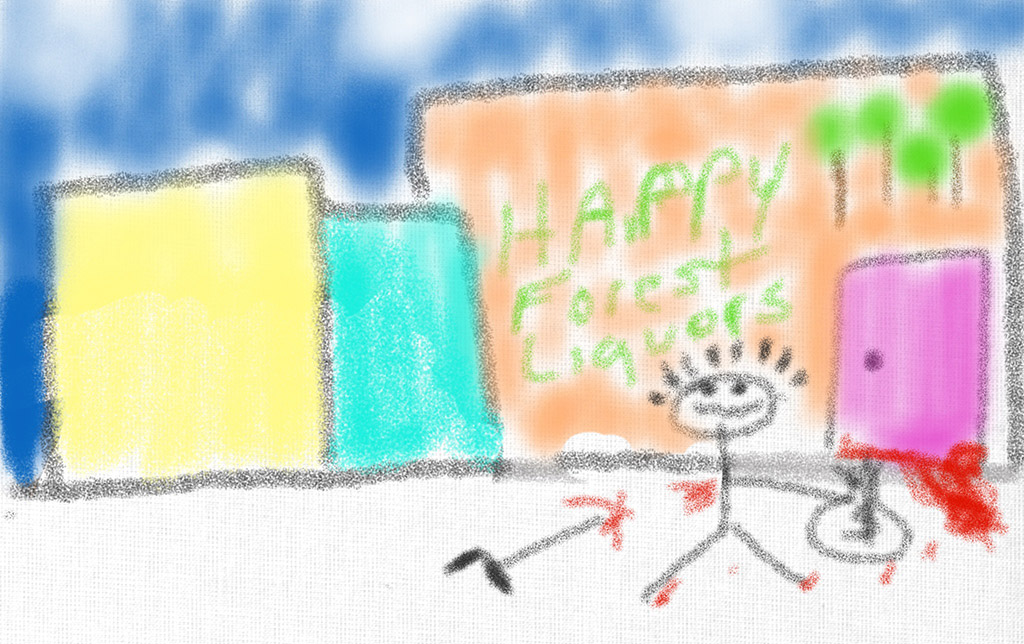 Is the the one-armed man the guilty person (I know Harrison Ford’s answer)?

What if I gain a lot of weight during the six weeks the police look for the robbing murderer? 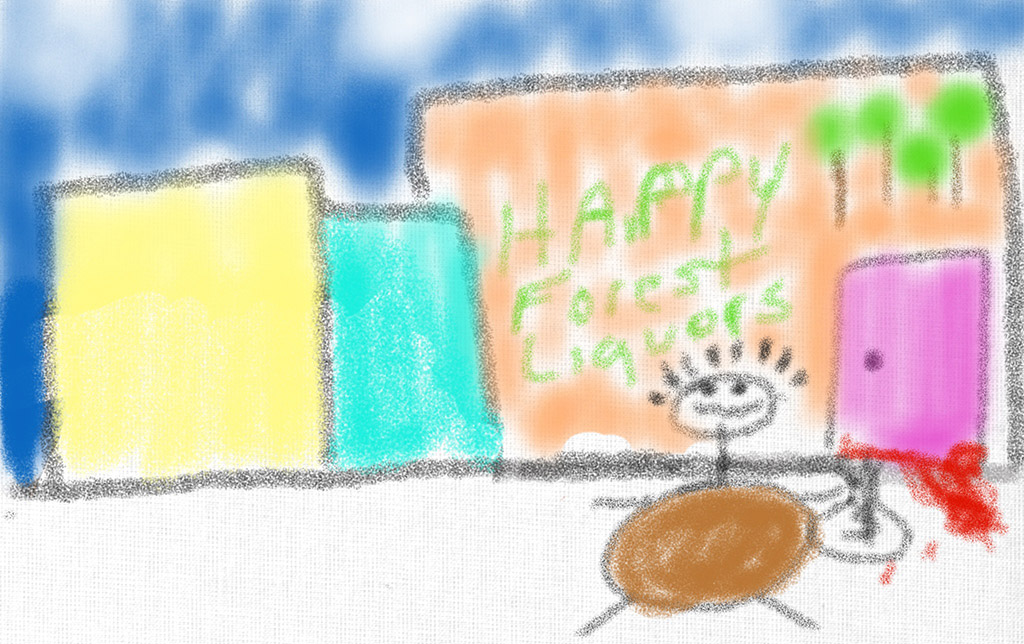 I doubt there is much controversy to either of these scenarios, and almost every one of you is going to think that identity has remained constant, that the same person is still there or here or whatever, even if that same person is not exactly the same (what’s the difference?, you might wonder, and good for you, you wondering person; the topic of identity when not dealing with people is going to be dealt with soon).

Remember when we talked about the Ship of Theseus, and I suggested that there are some who suggest that every possible change results in new identity. Such an individual, if she is consistent, would have to say that I am not the person who robbed the liquor store because I cut my fingernails or because I removed some hair. Such a person, though, is not really a person in the traditional sense of the word ‘person’, but is more of a collection of experiences that are joined together. Such a person cannot recall her first date, as all her recollections belong to someone else, just as such a person cannot look forward to a happier time in her life, as it will not be she that is enjoying that time, only someone who looks and thinks much as she does.

Few of you think like that, though. But why? If you are not in the memory camp and the physical features have changed beyond recognition, why is a person still the same even after extensive physical changes? What’s that? Sorry, the sound on my computer is muted — what are you saying at your screen as though Skype were on and our conversation was being passively monitored by virtuous government agencies? Ah, I see. Thoughts! The thoughts have not changed. Good! It’s almost as though you knew where I wanted this post to go. Thanks!

Of course, by ‘thoughts’ what your philosophically ignorant train of thinking was suggesting was the brain. What most members of the physical camp believe to be the defining feature of identity anchoring is the brain. So long as you have the same brain, you are the same person.

Another way to get to the brain is by elimination. Which parts of the body matter? For the body, that is pretty simple: beards, arms, legs, livers, ears, moles, etc., are all pretty superfluous. The part that matters is the brain. How much of the body matters? Really, again, almost all of the body is superfluous except the brain. What if the brain is damaged and the thoughts no more work good? Well, that is not the same brain then, is it? As far as which parts matter and how much of those parts matter, what am I, a brain scientist? (Yes. Yes, I am. Not in the United States, of course; regulations and all that have proven quite the obstacle to my life goals).

The solution to those worries is normally dealt with by a kind of common sense functionalism. Most of us don’t know Broca’s area from the pubic bone, but if you cannot remember anything from last night back, your brain… it don’t work too good. So the parts and amounts that matter for personal identity are the ones, whichever they are (and brain scientists know which those are), that affect the functioning of the brain.

Simple enough then. You are your functioning brain, and wherever it goes, so go you. Right? Right. Right? Well, dammit.

Let’s swap brains, then, you and I, and see where we go. Who wakes up in a svelte killing machine of evolutionary perfection and who wakes up in body aimed at child predation? No, no. There are no trick questions on this site. You will wake up, most of you think, in a body not originally yours. If the swap is permanent, maybe your personality will change based on how people around you treat you (either with sexual fearsomeness or with fear of your sexual perversity), but you are still basically the same person. You are your brain.

Note that this is different from those mind swap movies that are made every other week or so. In those instances, it is, or seems to be, the memories that are swapped and not the brains. A brain-based identity theorist watches those movies and laughs (partly at their sheer delightful hilarity) because the only change is that the individuals involved wrongly believe themselves to be someone else. How could they be, though, since their brains are still where they have always been?

There is really no way to confound anyone’s intuitions about the brain as it relates to identity, is there? Hahahahahahahahahahahahaha! Sorry, sorry — whoo, man. You really had there for a minute. Alright, let’s get to the confounding.

Suppose a man, let’s call him Gary, was born with half a brain. This happens, you know. Gary can still function and get about, but he only has half a brain. Maybe he cannot recall as much stuff as you can, maybe his motor skills are shaky in places, but he is a person and his name is Gary. Everyone okay with this?

Now let’s suppose that another person, Harry, has a regular, whole brain. But, egads! Harry is hit by a crazed Canadian driver and the resulting life-saving operation leaves him with half a brain. Now, this is not how it would work, but let’s suppose he still has around half his memories and the like. Is anyone here, aside from the identity-extremists, going to suggest that Harry is no longer Harry? Harry is still Harry even if only half of his brain is there since Harry can still function, to some degree, to some recognizable degree, as Harry used to.

Alright, and if we were to swap Harry’s half brain and Gary’s half brain, I suspect that you are going to think they, the people, go whither their brains do. Fine, fine. And if there was a third person, Terry, who lost his brain altogether, where is Terry? Gone. Right. 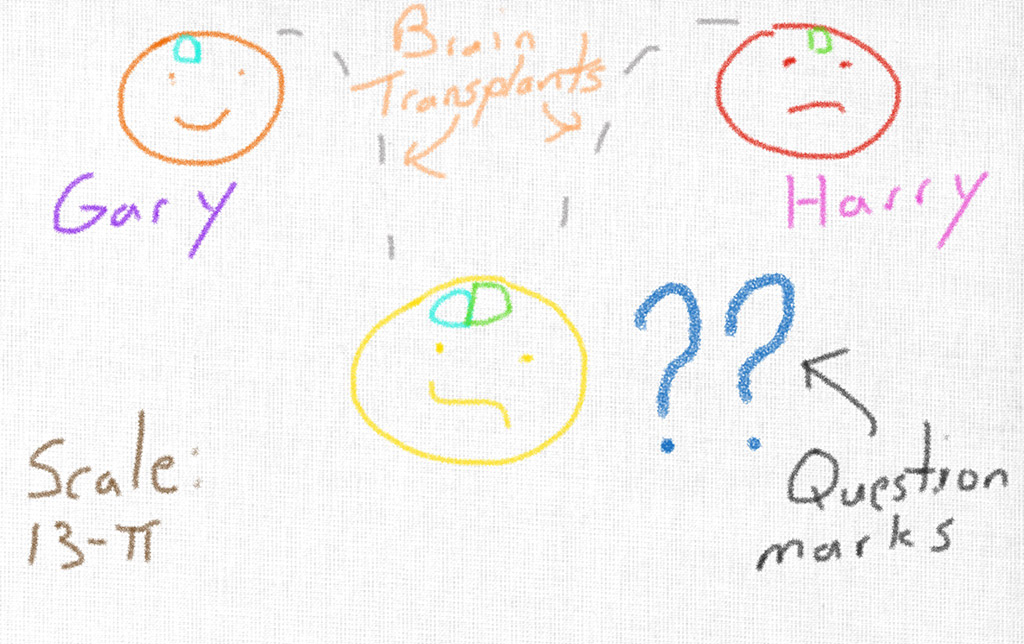 What about this, though (and this is due to philosopher Derek Parfit): let’s take Gary’s half and Harry’s half and put them together into Terry’s head. Who is that? It has half of each person’s brain (well, I guess, it has all of their available brain, so whatever) and, so, we are suggesting here, it has half of each person’s memories, is it both Gary and Harry? If not, why not?

If Harry with a brain in his head was still Harry and not dead, then Harry’s half with Gary’s half should make them both be (please try not to laugh) who they once were. Can the one body be two persons? What if both Harry and Gary had had whole brains that we split, combining one half from each in two separate bodies? Can two bodies then be four persons? Oh, philosophy, what have you done to our so carefully coddled beliefs about all that is personally identical in the world?

Next time: clones! And light sabers! And sex!!! But mostly, and only, just clones.